Futures opened strong on the purported Chinese QE...wonder how long that "fix" will last.  Gotta' wonder if QE suffers from the same dynamics as an addicts substance usage...it takes more and more to get less and less of a result? Mmmmhhh...the Vampire Squid (GS) trading near the top of it's range in pre-market.
As goes GS, so goes the market?

Then again, it's the 1st day of a new quarter, it's honeymoon time on Wall Street as new fund flows hit the market. Let's see how the relationship goes as we head towards middle-age? ;-)

The eco news for the day:

Mmmmhhh...that's interesting, the graphic disappeared...how embarrasing.  The ISM number was 51.7 (above 50 is expansion) I believe, with construction coming in significantly worse than expected.

The market got a sugar high off the ISM number...btw anything under 50 is considered contractionary, and then retraced with a green but less than auspicious finish.  IWM basically on the Monthly Pivot, and SPY in between the Monthly and Weekly Pivot, and the finaincials near the Weekly Pivot.  Btw...I reorganized the chart a tad so pay attention.  I don't think today's action indicates anything until we violate last weeks lows.  I also think earnings and guidance will be important. 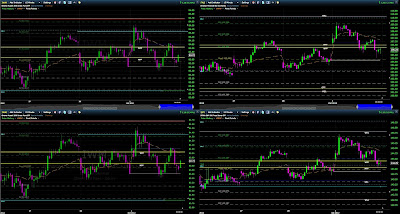 Futures are higher this morning.  This market reminds me of the movie Memento

There seems to be little connection from day to day.  The whispers are Spain is about to ask for the bailout for which they've been claiming they neither need nor want,  and that's why futures are higher.

Call me cynical, but one has to wonder if goosing  the futures, in the overnight dearth of volume, in either direction might just be a way to generate range during the day upon which traders can profit.  No range, no way to make money.    Reminds me of when wealthy athletes complain about the paucity of their multi-million dollar contracts with the refrain, "I've gotta' feed my family" Well, traders are people too...we gotta' eat. 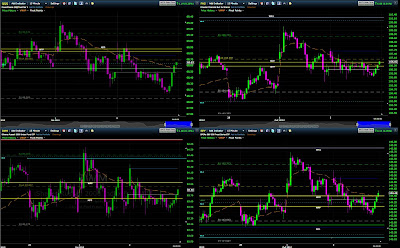 The markets closed green approximately 50% off the highs which were the open.  They continued after the close to reach their daily pivots.  Getting that Groundhog feeling again, but this too shall pass.  Tomorrow are the ADP numbers and the ISM services numbers, so this market could be off to the races or  back in the garage by the open.

eco news for the day: The employment news was bought and later sold off with the Qs and financials coming back to close near their highs, the Spy in the upper 3rd and the IWM at the Monthly Pivot about half way through the range.  Still range bound. As I sit here with my adult beverage the futures are moving higher after the seeming Romney debate victory.  Oh, and this is a tweet from snap polls taken after the debate: 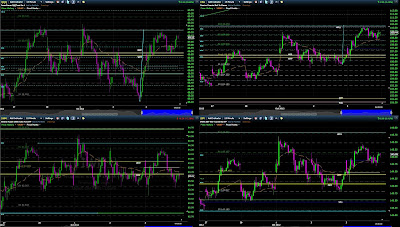 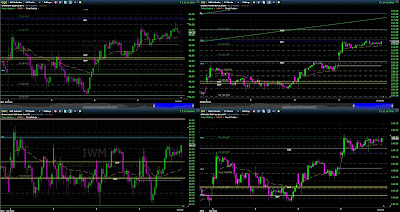 Oy...had to reboot and didn't save what I had done, so no econ news.  As you may know the debated jobs numbers were thought to be quite positive.  Market Action seems weak because it basically sold down after the first hour.  Would seem the prudent course of action to take some profits into the weekend.  Bad news was bought, good news was bought (then sold into the close).  This is market legerdemain. 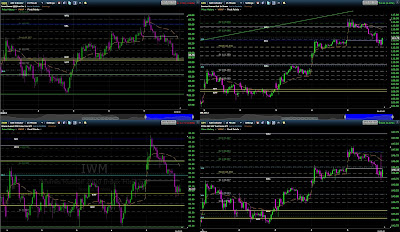 Which leads us to the week that is: 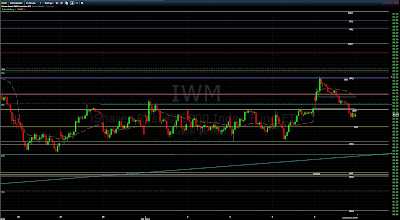 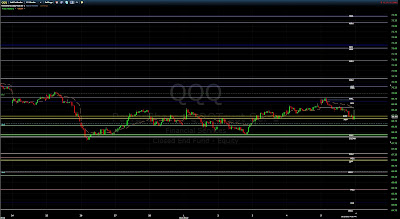 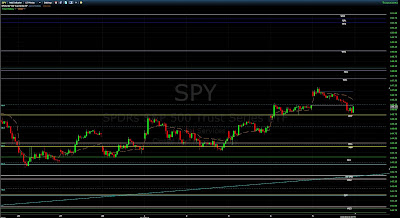 Charts are still strong on the daily time frame, and weekly.  No trends are threatened.  Spain isn't scaring the market, nor is Greece or Italy.  Earnings are still a few weeks away from earnestly showing their hand, and of course the elections....the trend is your friend, and it is up, albeit it could be choppy.  Expect weekly levels to be tested and pay attention to daily pivot levels.  If they can't push price action through a level, expect it then to reverse course to text the next level in the opposite direction.  Rising 50 SMAs would be likely strong supports on a larger time frame. Looking at SPY the most rigid resistance isn't until 150.50-151 The Qs and IWM have no real heavy confluence resistance overhead.