These are merely my observations on how the levels seem to be playing out.  I do not claim a causal relationship.  I'm merely pointing out where price action and these levels, perhaps coincidentally, seem to interact.  For those of us who have some form of attention deficit,  or are suffering from the progressive sins of our collegiate and young adult social activities,

1.   I'm actually starting this review back on Friday the 23rd when we bottomed to the penny on what was a weekly support level. As such, I decided to add a fibonacci retracement in purplish, pink (oy vay)   from the most recent swing high. They can be very useful.

2.   The semester S3, which basically coincided with the 23.6% retracement helped keep a lid on price action on Monday, and then served as support to launch the mid-day climb.

3.   Notice how VWAP and the 50% retracement from the July '10 bottom interact.  If you follow price action back on the charts, you will find this retracement level has interacted rather frequently, thus meriting my attention.  Actually, if you look to the beginning of the day, you'll see price action touched the retracement the 2nd minute of trading and then retraced, and that it also served as support between 9:52 and 10:02.  One could argue that that was merely support formed by the candle earlier, but the retracement has been around a bit longer.

4.   Hehehehehe...'nuf said...ehh, can't be that curt...Anyway as you can see, Semester S2 line at .58 served as resistance, that is if you consider SPY only getting to .56 close enough to be statistically significant.  Notice the purplish, pink retracement directly below that also.  I had been watching momentum basically bleed off since the morning.  I see stuff like that and it makes me think of Schroedinger's cat...

5.   After the stopper was pulled from the bathtub at #4, price action continued to fall, first oscillating around the opening level, before dropping to the confluence area around the yearly pivot point, and the 61.8% retracement of the most recent swing low.  Also, on my trading platform, I had marked certain pre-market price levels which also occurred in this area.

6.   Price action rose to the daily pivot which was .02 above the 61.8% retracement of the most recent swing high.

7.    Price action then dropped to what was an intermediary daily pivot level.

8.   Rising to your vanilla “old support becomes new resistance” price point which, btw...formed a most beautiful shooting star on the one minute, replete with a crescendo volume spike on which yours truly punted( or is that yours TRULY punted) 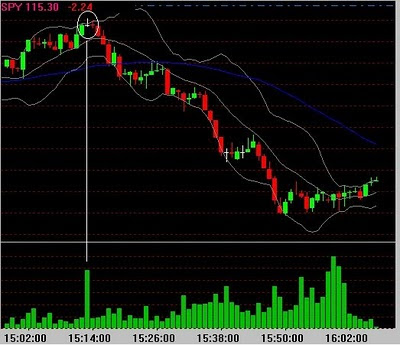 you can see, on the Freestockcharts chart that there was some hesitation in the confluence area where the Bear Flag support and confluence of recent swing low retracements interesected.

9.   The WPP and the Quarterly S3 caused some hesitation until the market closed at previous price action support. 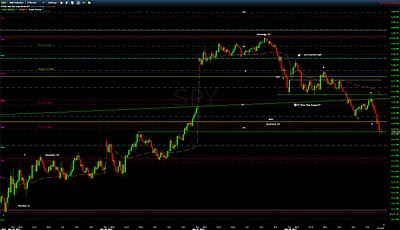