Many of you are familiar with Pivot Point analysis, which is a mathematical derivation based on previous price action.  It defines levels of probability for likely future price action.  Market Makers have often used Pivot Points across multiple time frames to find common adjacent levels between time frames that served as confluence zones - stronger levels of resistance or support ,than a single area alone.

Have you ever noticed that price stops or rises to a certain level that never particularly coincides with a previous level of support or resistance?  Oftentimes you will find that those levels coincide with prices calculated at a multi-time frame level.

I regularly employ charts of the SPY and IWM that map these levels, along with significant Fibonacci retracements, to define levels that may affect price action should they reach those levels.  Sometimes single levels end up affecting price action, many times, areas that contain multiple levels from multiple time zones, serve as confluence zones that are more likely to affect price.

Be warned, these levels are not predictive, but they do provide areas that may warrant your attention as price action approaches them.  I will provide on a weekly basis, these levels for the SPY and IWM, and will hopefully provide a recap of how those levels played out at the end of the week for the SPY to illustrate the concept.  So...

ñ     The 50 SMA and 200 SMA will be labeled (remember these will change daily so you will need to import the format links to adjust them)
ñ     I will also provide subjective price levels as defined by the price action..I have found that some price levels, contrary to “Candle Theory”, will continue to have some significance even after they have been eclipsed.
ñ     You will also find links to import the format into Freestockcharts.com, and you may amend them as you see fit.

The charts will look very busy on larger time-scales.  They are primarily designed to be used for the upcoming week.  The 15-30 minute scale is optimum.

For the first installment, let's do an overview of the last week. Then we will look into the next week's expectations. 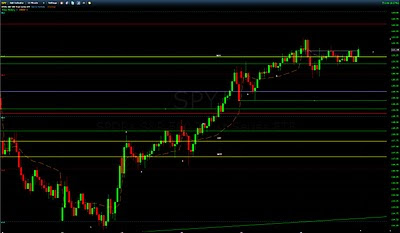 Before we consider the charts just a couple of macro comments to keep in mind:

Therefore, it's a reasonable assumption that we will get an announcement that will push money towards the risk trade, therefore stocks are likely to continue higher to test the August 31 SPY swing high with the next target being the upper boundary of the recent price channel. That swing high has a relatively strong confluence area starting at 123.00 with the 38.2% retracement of the July '10 low followed by the descending 50 sma, price action resistance then comes into play at 123.60. Above that, we're into the weekly resistance levels. 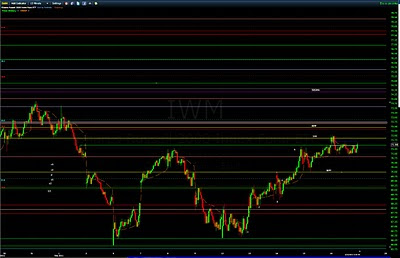 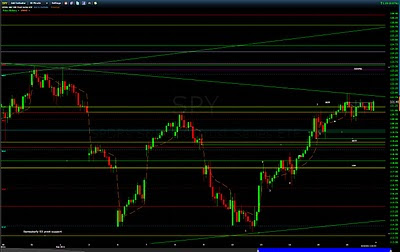