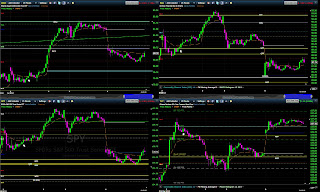 I've added to the panels to include bonds and financials (financials on steroids actually-FAS  ;-)) so you can better see the interrelationships.  I will switch out FAS for UUP to see what the dollar is doing.  Between those 5 you arguably, on a regular basis, get the best general feel for the market.  So what did we see this week:

You may find this interesting:

This is the primary list of tracking stocks I look at during the day.  As you can see the majority are ETFs representing industry sectors.  I also have a short list of currencies I watch but really, all you probably need is a dollar index (UUP-dollar strong, usually market weak).  I'll organize by either where they are net on the day, or where they are in their range for the day.  Depending on who is strong or who is weak, and where they are in their range, gives you a sense of the condition in the market.

Notice  the IYT (transports) are at the top of their range, with XLU (utilities) and XLP (consumer staples) just below well up in their ranges.  When utilities and staples are strong usually the market will be weak, but transports usually indicate strength as does IYR (real estate).  So more than likely we were at a muddling point in the market, or transition when this snap shot was taken.

Now, there are a few "stocks" on this list.  CAT and IBM are big boys in the dow representing different sectors.  If they are strong, likely market is strong.  Notice how CAT is relatively strong but IWM is in the middle of it's range.  Again, pointing to market neutral or transition.

I also track GS (Goldman Sachs).  The vampire squid is everywhere.  They know more than everybody.  If they are trading weak, be careful.  JPM is considered the best in breed in banking so they are here, and of course  AAPL.


Here are the images for next week: 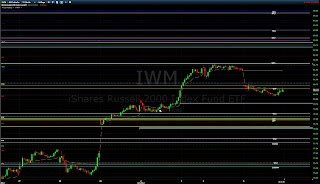 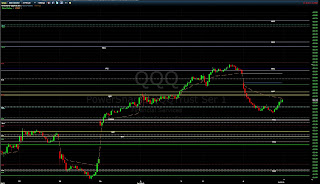 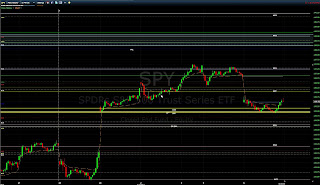 Looking at dailies, trend is strongly intact.  We're climbing the wall of worry.  One could say, "expect it to continue," but then, that inserts bias into the analysis.