Yeah, yeah, I know...no volume...welcome to the Summer. If you notice, Thursday's strong move was the highest volume of the week, and the relative value is arguably significant, and Friday's volume was higher than the rest of the week, except for Thursday...that's strong demand...is it op ex week games?  I don't think so, bonds (TLT) have been having a tough time of it, and the dollar has been on a downtrend.  Also, volume is usually higher at bottoms so to see it waning on a climb in the Summer is not unusual.  To compare volume today to the tumult starting with the CDOs cracking in 2007 and March 2009 denouement is probably not a good way to look at it.  Also, stocks were alot cheaper in 2009 (unless you're RIMM) so it costs more to buy them.  One could argue we were having a volume bubble and that a reversion to the mean could be expected...this too shall pass...what comes next?  Crystal ball please...oh cool, it's LED backlit..

I have said that we're probably on an upward trajectory into the German Supreme Court decision.  I still believe that.  Of course, my best friend is a rabbit, so take it for what it's worth.

I have also noticed a surfeit of stories regarding countries preparing for a dissolution of the Euro.  Whereas I don't think the Euro will outright disappear, it is a reasonable assumption that some nations may be forced to leave the Euro, or may decide they don't want to be a part of it.  Nations are finally realizing it means giving up cultural sovereignty to a bunch of un-elected bureaucrats in Brussels(which was an argument I remember having with my European friends during grad school in the late 80's. Having said that, Winston Churchill said the best argument against democracy was a 5-minute conversation with the average voter).  Perhaps the herd of humanity is ready to be a homogeneous flock, I'm not sure.  So, there may already be some desertion expectations baked in to the market.

Should the German court decide against the ECB, we probably get a harsh downward BTFD! action so the Street can shake out some weak hands, and then we resume upward trajectory into the US elections.

Since it's a reasonable expectation that there will be money printing in Europe this Fall to either/and finance a series of bankrupt countries, provide liquidity to moderate the effects of countries leaving the Euro, will Bennie the beard have the opportunity to print to keep the $ from getting too strong?  So, keep an eye on bonds and the US dollar.

Anyway...enough mental self-gratification, here are the charts for next week.  Oh...expecting pretty good gap up on Monday... 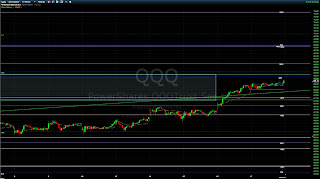 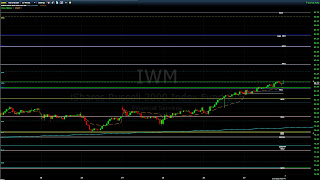 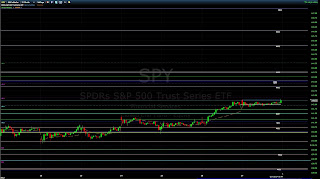 With all eyes on the spy we can see some longer term resistance in the 143.25 area, but the feeling I get is a bout of euphoria is coming.

As for the IWM 84.50 is longer term resistance, but euphoria means risk on, so given this index is a bit behind the spy in testing it's year highs, I would think it means to do just that in the not too distant future

The Q's...well August is often a traditional time to buy tech going into the holiday season.  69.60 has multi-time frame resistance, but we'll see.  Of course, arguably the Q's are GOOG, AAPL, and AMZN, so as they go...

So, where is the fly in the bull ointment?