For those of you who followed the "unconsciousness" blog last week, just drop down to the 14th.

9/10/2012:  ZZZZZzzzzzzz....well, not really.  Many stocks had relatively significant movement yesterday.  The indexes did some meandering, with IWM testing the ranges: first the old resistance from Thursday, that became new support on Friday-which it tested twice, and then by gently piercing the Friday highs just under yesterday's confluence of the Daily R1 and the Quarterly R1with an end of day descent leaving it resting on the Monthly R1 and Daily S1.  SPY's low bottomed at 144 (there's the test of the whole number again) near the 144.02 daily S1 then breaching Friday's high before joining the IWM and financials in the afternoon descent closing at the Daily S3.

Notice how SPY and IWM's movements were not correlated until the final descent starting 1:45.

Financials, tested the Friday's high's concurrently with the SPY and then were weak the rest of the day touching the daily S2 before closing slightly above.

Bonds, as can be expected, rallied into the close as the indexes sputtered.

Now for the descent....I'm on record expecting a relative meandering until the German pronouncements. I of course, could be wrong.  What could be the psychology of the market going into the 12th?

We've just had a long bullish run.  We're coming into a relatively short time period of relative uncertainty.  What do you do?  Simple...you take some profit, or hedge.  Thus the weakness, or at least a reasonable explanation of the weakness.  Which leads me to my, Nemo-you moron...moment.

Today is 9/11....mmmmmhhhh, which coincidently is the day before the pronouncement.  If the market is us, and the algo's are programmed by us, might that lead to a bit of hesitancy psychologically?   Just sayin'...

Watch the weekly pivots, and watch previous ranges for the action to test them.

Financials stayed strong all day, so didn't  the "Vampire Squid" GS, although it did sell off to close right on VWAP.

One more interesting tidbit.  The $ sold off significantly, yet the market couldn't maintain the rally.  Is it more a question of strength for the Euro and the expectation of a German "Die Daumen Auf! -thumbs up  (well that's literal...they don't really say that) for the ECB.

9/12/2012:  The Germans, as expected, didn't go Kamikaze (mixed historic metaphors there)  on the EU/ECB.   Indexes held the range, and GS finished near the top of it's range.

Can See Lloyd (doing God's work) Blankfein lubing up the arm to shove up Bernanke's ass to make his lips move tomorrow.

He's taking 40 billion a month of that bad collateral off the hands of the bank.   Mmmmhhhh...raw materials and oil ripped north with the decision.  I wonder how far the economy can go as oil climbs towards it's 2008 highs with the Middle East looking more like a powder keg every day?

We're not far away from my month end target of 153 spy.  There are headwinds in the 150 area.  IWM finished Thursday off, but got withing .70 USD of its 2011 highs.  Expecting gap up on Friday, with the potential for profit taking going into the afternoon.

I expect this bus to keep going north into the elections.  There is nothing to slow this train down unless earnings season is a disaster.

9/14/2012:  The Bernanke action carried over into Friday very nicely.  No surprise there. If you look at the tops on Friday in the IWM, SPY and FAS, you'll notice something interesting.  SPY basically topped out at the daily R1,  FAS topped out at the Monthly R3, and IWM the laggard behind the SPY topped out in the vicinity of 4 different levels:

O.K. so we've had quite a run.  My predictions have been pretty accurate, but let's get something straight about predictions.  It's a bullshit exercise of my ego.

We have fun with it, and it's a natural predeliction of the human animal to want clarity, and thus to declare knowledge in something that cannot be "known," and of course there's the ability to dislocate my shoulder and pat myself on the back...Vad has a high level of expertise at that ;-).

Fact is, everything in this game is a probability.   Price action is all that matters.  Actually, by having a preconceived idea of where I think something is going I automatically insert bias into my thinking.  Having scenarios is good, but bias can influence your decisions in a bad way, not allowing you to see when action is going against your pre-conceived knowledge.

Frankly, that's what the Zen mind, and the Taoist principle of Wu Wei (non-interference) is about.  You've got programs in your head that process the inputs from your external sensors (eyes, ears, etc.) The accuracy of processing is determined by the accuracy of the programs in your brain.  The Zen (Cha'an in Chinese)  mind is about getting the programmed mind out of the way so that you can accurately process information from the external environment without bias.

What's worse, because of the chronic human disease of Pride, the more often I'm right, the greater the probability I start to believe my own taurine excrement. Thus the saying, "Pride cometh before the fall."

Funny how the market is just a microcosm of life, huh?

(I have to chime in at this point with link to A Taoist Trader course. If you like the way of thinking in the text above, it's a must. - V.G.)

All I've done is looked at the relationships of how things seem to be moving, and frankly figuring the Germans wouldn't punt, and that Bernanke would ease was just probabilities.  People have been expecting easing for months.  So every month he said "no," brought us closer to when he would say, "yes,"  because, one could easily make the argument that structurally things aren't really any better than they have been and that environmental factors are actually worse.

Also, by committing to open ended QE, Bernanke has now taken himself out of the "will he," or "won't he" dynamic in regards to Fed intervention in the markets.  So now, that is one less variable upon which the market will trade-it is now a relatively fixed parameter.

He is now passing the ball to Washington, which frankly, doesn't make me sleep better at night, to address the fiscal situation.  Give Bernanke credit, he's been telling the D. C. cretins to get their fiscal house in order since Day One of his reign, and look how far we've come...not

Now, the market is more likely to trade on economic information.

This week is Op Ex and a triple witching hour, so we could be looking at some serious shenanigans in the market depending on where option positions are on any given issue, so where the market is going probably won't be determined until next week, which, after the run it's had, a reasonably range bound week would be considered a consolidation, and a reasonable expectation.  Then again, we're still open to headline risk, so watch what the action does if some serious news pops up.  If it sells off and then is bought right  back, trend is in tact and market is still strong.  If history repeats itself, we'll be strong through the election, but... 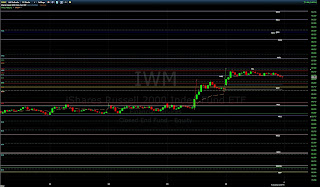 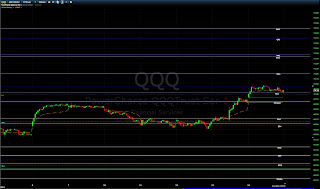 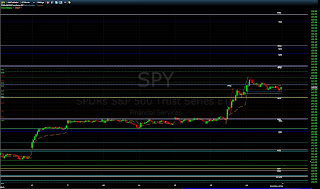 IWM:  you will notice there are three red lines between 84.70ish and 86.80ish.  Those were price swing highs going back to 2011.  They are not pivot levels, but given they were important points reasonably close together, price action may orbit around that area to consolidate next week...or not.  The rising daily 50 SMA is at 80.50.  I would likely think that the extreme bottom, and given the 4 day consolidation between 84 and 84.60ish, barring Headline news, we stay above that.  As far as how far north we can go...clean air up here.