09/17/2012:  Had insomnia...timing couldn't have been better.  What a snoozer for the most part.  Reminded me of a Neil Young line when he was introducing a song on the CSNY 4-Way Street live album (a two record vinyl set....I'm old.)


"It sorta starts off real slow and then fizzles out altogether"

Market kinda leaked downward for the day with financials finding the WPP, and then the market making a run north from there to make a VWAP run into the close.  Notice that SPY and FAS bottomed at tracked levels together, not IWM.  What does that say about risk in the market?  No specific opinion.  One day does not a trend make in OP EX week...canary in the coal mine...maybe?  For all intents and purposes the action of the last couple of days looks like a big ol' bull flag.

Headline risk now looks to have shifted from the Euro-orgy, to the Islamic Inferno and the Sino-Nippon conflict-that one could make for a real mess. 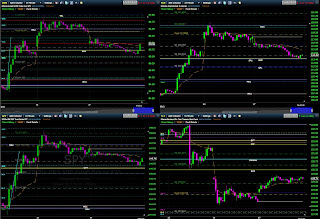 
"Good" news, not being bought or sold.  OP EX week.   Not really much to expound upon today. 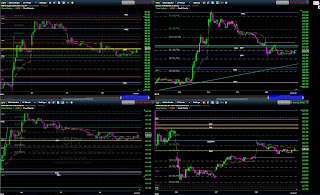 09/19/2012: Groundhog Day III...'nuff said.  No real buying in the market rumors/news not particularly of the concrete variety (haircuts in JCP's now).  Short covering on heavily shorted stocks.  Tight range with only the bonds making consistent progress retracing the Bernanke news.

The one REALLY interesting move so this week...oil.  With the news of endless printing in Japan Europe and the US, as well as Mideast tension,  oil drops almost 10% by Wednesday night....just shaking out the weak longs?  Or, is it a sign of things to come....shhhhhhh....recession....deflation...uuugh.  Bennie's beard should start turning gray.  Next big support on USO is between 33.50-33.80


The Quad Witching hour is upon us. I'm thinking, some more volatility. 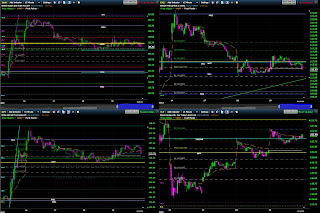 09/20/2012:  Yeah, a bit more volatility today.  Not particularly good economic news starting with Chinese PMI last night.  Higher initial claims (which usually get revised further upward).  Philly Fed was better than expected though paultry.  So we gap down for a 1/2 hour, and then....

IWM  bottoms at the March 2012 swing-high line I left on the graph, which was also with in spitting distance of the daily S3.  If you remember from last weeks blog I said that these three lines would likely corral the weeks price action....SFSG. SPY also bottomed near the daily S3 which corresponded with a fib. retracement I'm tracking....ahhh the confluence of levels again.

From their it was onward and upward.  With SPY actually closing it's gap to finish higher by $.01USD, and IWM losing a bit of steam finishing in the middle of it's range. Soooooo....bad to middling economic news was bought.  We're going higher it seems.   BTW, look at TLT.  Last three days, just sell the open and forget it. 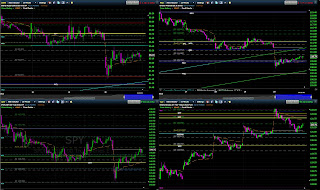 We also found out that the Obama Administration has mandated no surprises out of Europe until after his corona....I mean, election, although Greece later denied it.  I wonder if the bond market will stand for that?

Anyway, the last "week that was"  chart: 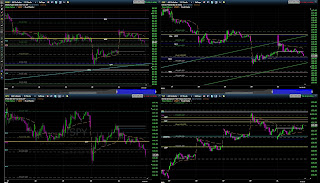 Remember, SPY looks deceptively bad today...you want to know what its relative performance was, look at the IVV.  The  IWM closed within $.15 of the weekly pivot.  Financials were weaker this week, and bonds regained some ground.  Macro economic information domestically was mixed with housing looking as strong as it has since '09.   Also, don't forget, the SPY went through re-balancing today so volume indications are completely out of whack.

For those of you not familiar with him, Bill Cara (http://caracommunity.com/), with whom Vad is associated, does a complete, if not mind-numbingly extensive, "Week in Review" that is usually published on Sundays.  At introduction he gives a summation of the macro-economic data both good and bad from the most recent week as well as the preceding, with a forward look as to the week ahead. I can usually feel the vitrified brain matter leaking out of my ears if I try to understand the whole thing. 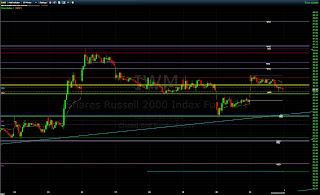 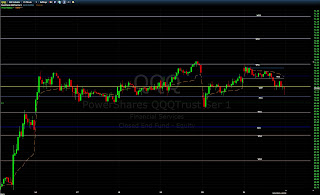 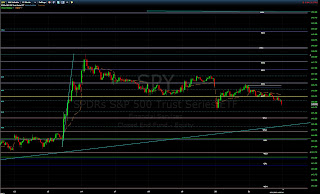 Looking at next week we can see IWM basically treading water having peaked out at the Yearly R1 on the 14th.  Could see that assaulted again this week.  Tight range this week, which like tight Bollinger bands, usually means expansion coming.

SPY same thing...look at either SPY or IWM on daily it looks like a bull flag

The Qs:  They hit the yearly R3 last week, that's impressive, how skewed is that because of apple?

Anyway...my prediction for next week:

Last week I mentioned how my prediction "accuracy" or the lack thereof, inserted bias into my thinking, and that price action is all that matters. So I'd thought I'd expound a bit on bias, and where it comes from.

Of course we'll use my Taoist background from which I basically parrot everything I've been taught.  There's nothing particularly original or organic that comes out of my mouth unless I consumed too large a quantity of adult beverage.

Anyway, the last verse (81) of the Tao Te Ching first two lines are as follows:

Why do we like or dislike what we read or hear?  Simply, because it brings us pleasure or pain.  If you're left-wing politically, right-wing ideology is not fine sounding, and vice versa.  If you are a sports fan of team A, and team B, beats the bejeesus out of them, it won't be fine sounding to you.

Throughout our lives and starting from the time we are born, we develop a series of internal, psychological programs as a result of the messages from the social structures in which we live, that form the basis of our beliefs. Through these programs we process the data we absorb through our senses. As passionate beings with the potential for rationality, we become emotionally invested in those beliefs.

Now, based on our experiences and our personal disposition in conjunction with these programs we've formed,  we perceive certain things more easily, or we more easily attach ourselves to a given piece of information (I don't know what happened to the font -don't ask) because to us, it is fine sounding.  So, our subjective interpretations are our reality. That subjective interpretation is our bias.  So, we share a kinship with people who see information the way we do. (Think "Men are from Mars, Women are from Venus" -frankly I often question if we are the same species, but I digress).

What happens?  Well, in trading we form a thesis based on news and information we read that sounds "fine," to us and unfortunately that thesis, because we are emotional beings, slips its little tendrils around our psyche, and latches on.  A + B+C has to be bearish!!!  WTF!!!!  why is this stock still going up?  Really....so, basically we're reduced to having an argument with the screen, as our trading account continues to bleed.

Everything you read is merely opinion interpreting data, which itself, may be inaccurate or incomplete, and as the old saying goes, opinions are like a certain part of the human anatomy, everyone has one, and they all are offensive to the olfactory senses.

So where does that leave you...to which Lao Tzu answers:

the wise one does not know many things;
He who knows many things is not wise.

We don't "know" what is going to happen in the market based on a given piece, or pieces of information...That information is in the form of words, and as we know, words mean diddly squat. We create "knowledge" out of our biased mental models as we interpret that information. Remember those words you read are just the distilled thoughts of someone else's mental models based on the way their bias interprets their "data" sources.

What are the resulting actions and reactions that take place from those words are what is important-NOT our opinion of what should take place because of what we think we know.

Is what we perceive as "bad" or "good" information being bought or sold?  That's all that counts.

Go back to the Oracle at Delphi and Socrates.  True knowledge is knowing that you don't know. So the key is to, as stated further in verse 81:

The Sage does not accumulate (for himself)

To accumulate, means to take possession of.  I accumulate money, food, clothes, etc.  Well, I also accumulate thoughts and ideas.  The problem with accumulating, is we often become emotionally attached to what we accumulate (remember those tendrils). It colors our perceptions, takes us away from reality.  In trading, not seeing clearly what is happening on the screen is not good.

So the key is detachment through discipline. Do not predict, or if you do, accept quickly when your predictions don't come true.  Do not let your desire (desires are the source of suffering according to The 4 Holy Truths ;-)) to be proved right, interfere with doing the right thing.  When A happens see if B or C or D follows, and act accordingly.  Do not hope...hope is an emotion that has nothing to do with reality. Strict entry and strict exit parameters.  As Vad often says  IF "A"  then do "B."  You never hear him say IF "A" maybe do "B."

I should perhaps explain, because those who read this who are in the room always see me talk about my stop as being X "ish".  It sound as if I'm being squeamish or undisciplined about my stops.  That is not really the case.  I've been watching LIIs for a while now, so I have a little bit of experience.  As algorithms have gotten better, they know better how and where traders place stops.  It's not like I'm unique in regards to how I place stops.  So, as price action approaches my stop I watch to see how it behaves in that area to discern whether an algo, or another trader, is just trying to shake me out of my position before it heads off to the promised land.  It is not something I would recommend to those starting out, nor is it something to which every trading style should aspire. It's an explanation for clarification.

BTW...if you don't think a trader or trader(s) can shake you out of the position, I sat in a trading room when the head trader called out, "SHLD is weak.  Gentlemen, short at will."  Well, 15 guys started whacking bids.  $3 lower, I got out.

Well that's enough.  I'll leave you with one last quote(for another time) from a Taoist sage named Chuang Tzu:

Those who dream of the banquet awake to lamentation and sorrow,

Those who dream of lamentation and sorrow, awake to join the hunt.