Tuesday: Bad news on ISM and Construction spending.  So what did we do?  Well, after some obfuscatory price action, the IWM bolted higher, spy finished slightly red, financials green.  All in all, bad news was bought. 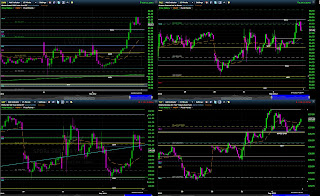 Notice on Tuesday to what levels the price action reacted...

IWM bottomed at the swing high top from August 7, which served as the top of the related fibonacci draw, to which that aqua line at the bottom belongs.

SPY bottomed, close enough for government work, in the confluence of price action, the Weekly S1, and 38.2 retrace from the most recent swing high.

FAS retested the low from the 31st, rose and then tested the WPP but could not hold below.  When financials are strong, equities can be strong.

TLT couldn't hold below the confluence of the 50SMA and the WPP.

Coincidences?   I think not...

Which brings us to the tight ranges on Wednesday....mmmmhhh Draghi, the  GS alum that he is, will have made pronouncements by the time the market opens on Wednesday...I'm on record in the trading room, given that GS finished the day at the top of it's range, that we're likely looking at a big gap up on Wednesday...am I full of Taurine Excrement?

Although the initial gap up was not as great as I thought, pre market action had IWM right up against that volume overhang in the 82.75 area.  After the open it was "Gap and Go," the market never looked back.

For Beau, here is a graphic of the FCX trade from that day: 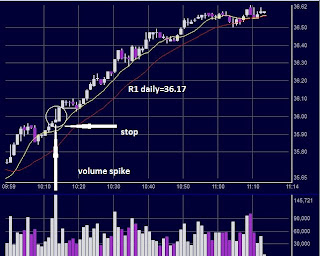 I'm not sure it gets any simpler on a trade, or more text book.  The whole number is always a potential inflection level.  You can see the former resistance level at 35.96ish where the arrow points to the stop.

When price action pushed through 36 on high volume, it was immediately pushed back below 36 as signified by the tall wick on the candle.

Well...Thursday was ridiculously strong, so I was expecting a rebid, that is for price to move back over 36, which it did.  That's where I got long (.03 I think).  Now, FCX was already up strong for the day, why did I think it would go further?  Well, pivot levels had R1 at 36.17, so it really wasn't extended from a pivot range point of view.  I think I even said in the room the break of .10 would be another entry, and then it was just trade management .

Friday:  More of the same...tighter range on the indexes, but there was a rotation where many stocks were up strong with spy breaking through the highs going into the close.


The week that was: IWM:  Finished at the weekly R4, albeit in what was a reasonably tight range this week

SPY:  Finished at Monthly R1 and above R3...yeah, this was a strong week alright

FAS: topped out at the daily R2 today in between Monthly R1 and R2

TLT:  finished on the weekly S2

I'm thinking we have further to go, 153 on the spy, but since we're in a gag....risk on...environment, IWM should be leading the way.  It hasn't surpassed the April 2011 high.  I think it likely get's there before we see a pullback.

Of course next week we have the German High Court ruling, so the action could go any number of ways, meander until the decision;  move euphorically higher, and then will it be buy the Euro party, or sell the news?  I'm on record saying they won't trash the whole enchilada...boy, what an epitaph that would make on their gravestones in the local Friedhof, and I'm sure the euro apparatchiks have already figured away around a negative decision. 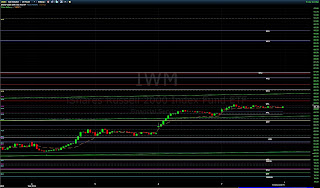 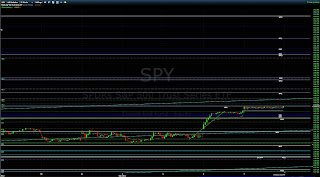 In our "risk-on" (I want to find the guy who coined that and punch him in the nose) environment, IWM should be leading and it has shown relative strength.  On the chart you will see three dark red lines above the current price action.  Those represent previous swing-highs going back  as far as to 2011.  I would, barring "sell the news" on Wednesday, expect to see all of those eclipsed, with confluence resistance at the 2011 swing high and the WR2, and some at the WR1.

SPY has been a bit of a relative laggard to IWM as would be expected.  No significant resistance, unless the upper channel trend holds it, until the 147.25-.45 area.

You can almost feel the building euphoria in the market.  Which reminds me, "You want to make the gods laugh?  Tell them your plans?"