Well, we got the bounce I thought we would from yesterday's post.  Retail sales up strong signaling a strong consumer.  Manufacturing down. Market bought the consumer news and ignored the bad manufacturing. 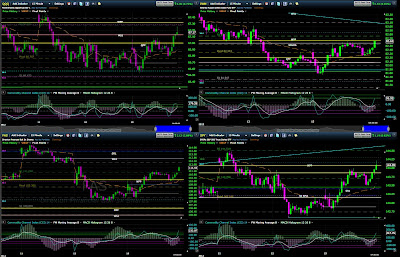 The market opened higher, sold off to support then moved significantly higher, retracing initial gains to fib levels and then ran to close pretty much at the highs for the day.  Looks like more to go tomorrow.  Downward trend lines in IWM and SPY still intact on the daily.  IWM finished at the Weekly Pivot point  SPY the proverbial "hair" above the Monthly Pivot.  Earnings earnestly embark this week (o.k. that perhaps was a stretch), so we'll begin to get a feel for performance and outlook.  The rubber is about to hit the road.  I do think, with a few pullbacks here and there, the long-term looks up in general, but let's see what Congress does the first of the year.

Goldman blows away there numbers end up down.  Economic news is mixed with inflation showing up (ex that stuff like food and oil that doesn't count).  thinking this is just a technical move until the decisions on the results of earnings forge a market direction, which I think will be up.  Having said that...  Intel, IBM, an CSX reported after the close, and they were tepid in their results, so the question will be how they trade tomorrow.  We're still early in the earnings season, so, if they BTFD! if there is a dip, all systems go... 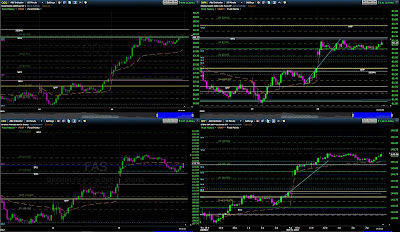 As we can see, biggest percentage gain was in the SPY that basically bounced off WR1 to finish near the highs.  The Qs met resistance at the WR1 as did the IWM, with financials taking up the rear(looks big, but that's FAS. The unleveraged IYF was up .66%-nothin' to shake a stick at mind you)

I think stop hunting above 146 is in order for tomorrow.

Some bad news on the jobs front, but good news on the manufacturing front keeps the majority of the indexes flat for the day, except for the GOOG oops that caused the Qs to drop to the Weekly Pivot.  Primarily range bound activity absorbing this weeks up move so far. 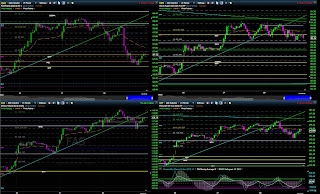 Housing came in stronger than expected, but the pall of the GOOG earnings cast a long shadow over the market.  Albeit, most of the poor performance was due to the Motorola division, it looks like GOOGs ad revenue growth rate is starting to slow.  Add that to the hiccup in earnings for many of the belleweather stocks so far, all eyes look to AAPL next week, which looks destined to reach $600 fairly shortly. 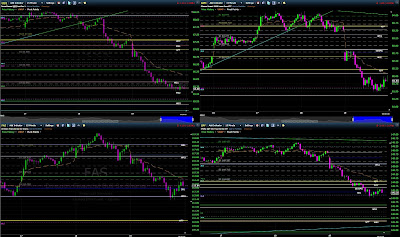 As we can see demarcated support levels supported the drop today, which would make sense.  Shorts were covering, although not exceptionally strongly, at the end of the day.  Remember OP EX week, so nothing is at it seems.

On the dailies:
The Qs, of which AAPL is 13% are headed for the 200SMA at 65ish.  just above that around 65.35 is fib confluence as well as price action support

IWM bottomed at significant Fib confluence today, but could have the 200SMA in it's sights in  the 80.40ish area.

The financials haven't even broken the upward trend line yet, although they could do that Monday 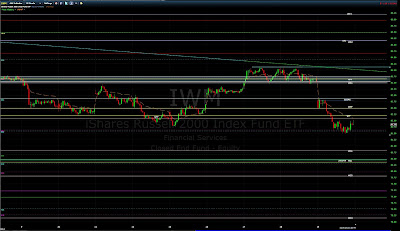 The 200 is coming up around 80.45, which corresponds to the August breakout level. below that there is no gap until the 77.65 level, which is also a volume vacuum.   We now have some significant overhead volume between 83.55 (the top of the Friday gap) and 83.75ish. 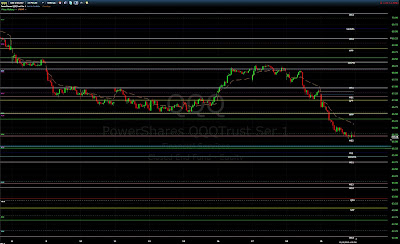 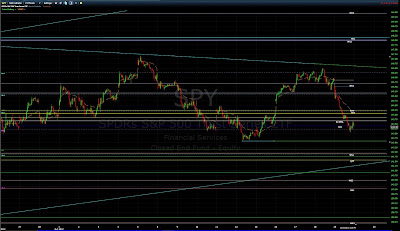 SPY looks like it will be testing the lows from October, then possibly trend support currently around 142.  Gap low of 141 is next with volume support in the 140.40 area.  Overhead volume resistance in the 144.30 area with a descending trend line around 146.40.

Nothing looks bounce ready.  As I said, financials haven't even broken their upward trend line yet.  However bonds do look stronger in all durations, which is normally negative for equities. The only sector that looks strong, is gold miners.
Posted by nemo at 7:52 PM