Nemo: "Well yeah Les, that knocked about $.70 off the price.  So, for all intents and purposes,  the SPY was only down $.20 closing at the Semesterly R2. "(well, close enough for government work) 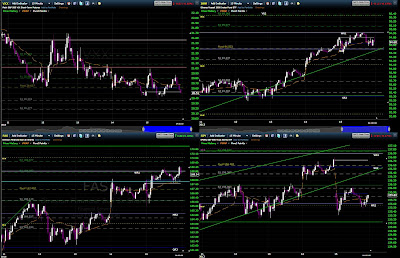 Actually, instead of giving you each day of the week this week, here is the week.  Notice the VXX in the top left.  It just keeps dropping.  No fear.  No real hedging going on.  Notice the supporting trendline in IWM and SPY.  Even though SPY seems to have closed below, add back the dividend and it closed just above at the Semesterly R2.  Notice the FAS just kept going up, and of course notice how  they basically ended at the Weekly R1 as did IWM.

What's gonna' derail this market?  I don't know.  That's not the point I suppose, we watch for clues.  From a macro point of view  everything is relatively copacetic.  However, wage inflation is happening a bit faster than the Fed would like and business inventories were rather large, but bad news as well as good news is bought.  But jobs are being added, and unemployment claims, at least at the headline level, are coming down, even with those looking under the hood claiming it's all a Potemkin village.

Outside of the usual concern about some exogenous event (think: EU and bond market), things are moving along.  That points to the next earnings season as the next big test, and I think that kicks off on, and don't quote me on this, April 20th.  If earnings begin to slow or contract it's a perfect setup for "sell in May and go away..."  Having said that, I'm beginning to hear the sheep....er...I mean...public, when I'm out and about, talking about the market.  Wall Street needs somebody to sell to.  Let's see what happens with 401k inflows on the first of April.  Poetic...bet we have a new high on the 29th of March, giving everyone the weekend to salivate and slam their 401k money into their favorite mutual fund on.................... April Fools Day....Too perfect, like the S&P bottoming at 666.

(btw...I didn't know the SPY went ex-div either until I asked.  I saw nothing else was really down, and I didn't think Jamie Dimon getting caught with his pants down on that report would do it.) 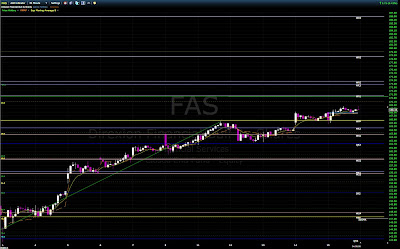 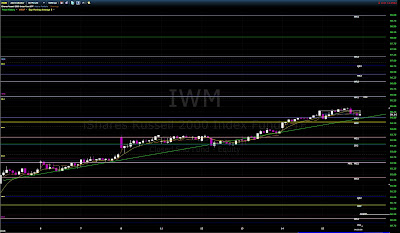 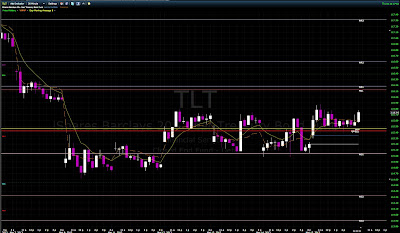 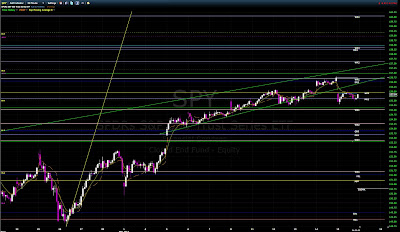 Above you see the SPY action.  Again, with the dividend back in it finished the day sandwiched between the SR2 and that trend line just below.  That trendline above is the longer term trendline resistance going back to November.  There is currently an ascending trendline resistance from the 2009 bottom at 165ish that has no bearing as of yet, but if the train kept a rollin'  sometime this Fall we'd reach it, but enough about what if's, maybe's, and predictions...it's all a crock.

THIS JUST IN:  Cyprus just pilfered a percentage of everyone's bank deposits as part of the Euro zone bank...ahh...saving...reliquifying....ripping off the taxpayer...act

There's a rude joke in there, but I'll abstain.

BTFD!  until it doesn't work.