Then came the Fed minutes.....

They've been hinting that they may or may not taper, increase, decrease, stop, add to, QE sometime between  July and........The Rapture....sheesh.   Anyway, the trial baloons have been going up for awhile, but the market turned on that message this week.  The actual economic news, at least on the headline level was good to very good.

Now, was it just an excuse to take profits, or are profits starting to be taken because participants now have to wonder if this market can ride on it's own without Bennies' rocket fuel... (hah, for you who grew up in the 70's that's a mixed metaphor)?


Here's each day again with it's respective daily pivots so you can look for confluence and relationships.  Well, for some reason I forgot to make a copy of Wednesday's. Friday's is a bit more compact to show the whole week.  The diagonal lines are channels I've drawn from earlier.  You'll notice as the week progresses, I'll remove them.  It's worth noting how price action will maintain a relative slope.  Notice on Friday's view, how even Thursday, and Friday's price action, even though it was below the lower channel line, the price action maintains a relative congruence with the line-happens alot: 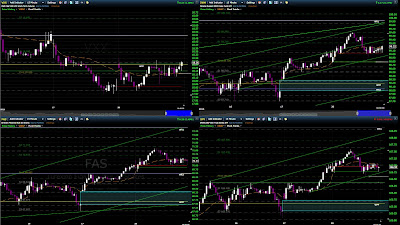 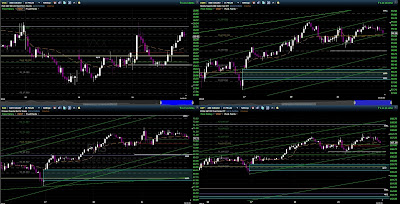 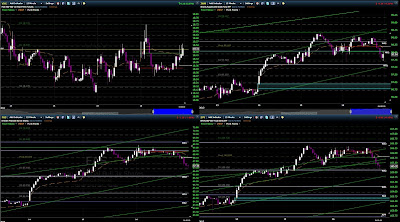 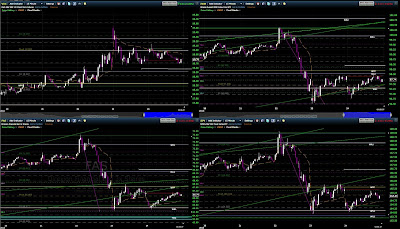 Now, for a little mental self-gratification, here's a look at some levels on the daily for SPY (I do this for IWM, QQQ, TLT and FAS too)...but that's for paid subscribers ;-) : 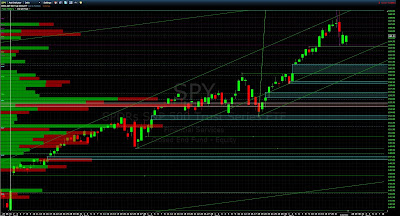 Before we go Chicken Little, here are levels at which I am looking.  As you can see, the bottom of the price action from this week, just about tested the breakout   level from, wow... 10 days ago.  I've drawn in a fib line from the high to the low, one from the April low, and one from the November low that isn't readily visible.  As you can see, yesterday's action already had reached 38.2% retrace of the high to the low.  What I was looking for here was overlap in levels as you can see, there is relative overlap/confluence between two separate fib sequences where price closed Friday.  I'll also be looking for confluence between multi-time frame pivot levels and the fibs.

The blue shaded areas are gaps, and of course the green horizontal lines are price levels.  If we break through the week's low, we'll test that 163.70ish area and below that, of course the whole number (163)  Below that we have a fib confluence zone between 161ish and 161.25ish, the lower of which begins to get us into the gap.  By the way, the volume for the last few days has been significant as in topping volume, or at least the first attempt at a top.

You can see the channel lines I have drawn in.  Intersections of price action with the channel lines is worth my attention,(in an ADHD sorta' way) The last indicator on this page is Volume at price...As you can see, between 155 and the bottom of the gap just above 156, we did alot of volume as signified by the red box.  That also corresponds with the 38.2 retrace of this run since November...that would likely be the line in the sand.

Having said that, I didn't even show you where we could go on the way up...If we head north, I think next pullback happens somewhere in the 172-178.50 area, based on Fib projections..(Might as well go Voodoo, and cut the head off a chicken and drip the blood on my computer...probably be just as accurate.) 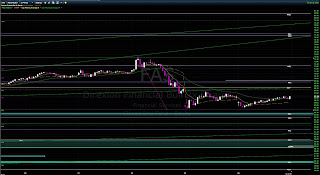 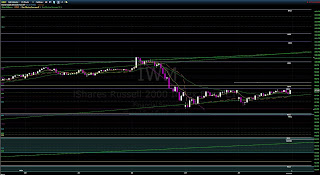 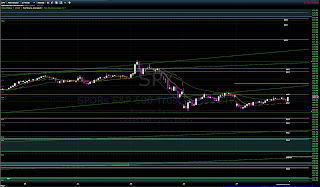 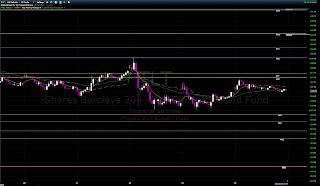