Well the correction is on.  We ramped up into Bennie as I thought last weekend.  Frankly he didn't say anything that he hasn't been saying for the last few months.  I think the big difference this week was China.  They are having or seem to be having a liquidity crunch...one of their banks almost, at least according to the news, almost went under this week...Chinese Lehman?  Bear Sterns? Reports of some failed debt auctions as well. Yields on debt around the world, especially in emerging markets, are climbing fast.  That means debt is becoming much more expensive.  WAIT!!!  I thought Bennie said rates would stay low until he says otherwise.  Are the bond vigilante's back?  I hear Paul McCartney, "Someone's knockin' at the door.  Someone's wringin' a bell."  The more I think about it, the more I see Jack "Heeeere's Johnny!"  Nicholson, sticking his head through the door, and then there's this:

Seeing a pattern here?  Makes me think, outside the box that is, given my relatively esoteric background,  maybe the Mayan thing may have been the end of this type of financial era in the world....things are looking a bit iffy.

I think it's reasonable to expect volatility to continue, especially until after the 4th of July, until we get solidly into earnings season.


Anyway, wanted to show you something: 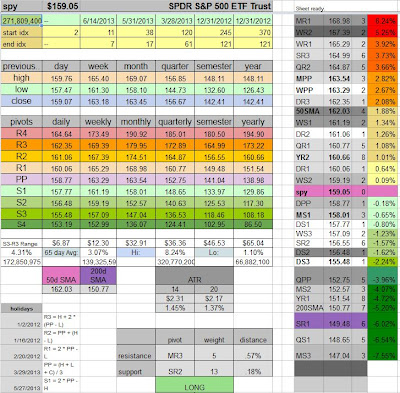 This is my "handy-dandy" multi-time frame pivot spreadsheet that also provides some other information.  On the right you can see how far away various points are percentage wise from the price, as well as their price.  Below the main grid notice the number below "S3-R3 Range".  That is the dollar range as a percentage of price.  You can see to it's right the "65 day Avg:" that is for the quarter.  Well, the day before that range was 8.03% in spy.  When you have a wide range between pivot levels, the half-way points between those major levels become more important which leads me to the following:

Notice where price action bottoms in the above chart?  Not perfectly, but the midpoints between the "S" levels basically hold the price action.  Notice also the fib retracement levels on IWM bracketing the mid point.  That's an $.08 range.  That is the 38.2% retrace from the November low, and the 50% retrace from the April low...funny how that works. 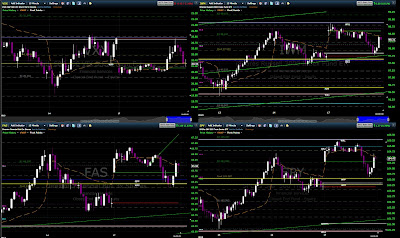 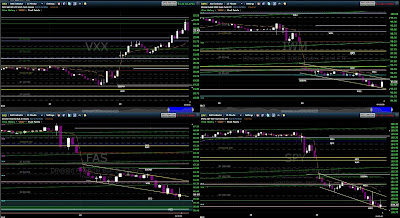 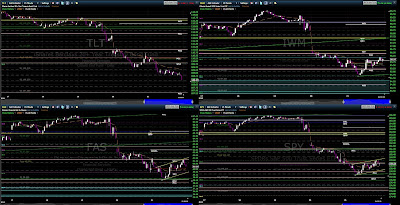 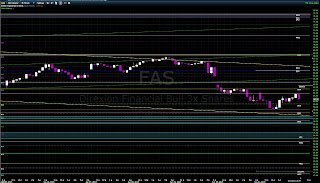 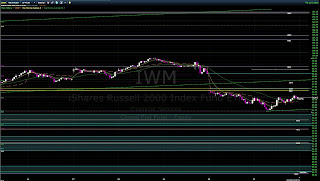 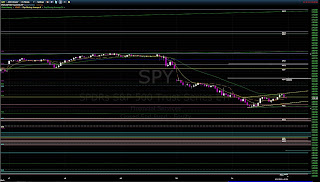 Notice in SPY we are getting closer to the red rectangles, which are price levels of heavy volume.  Points of possible inflection.  Expect tests there. 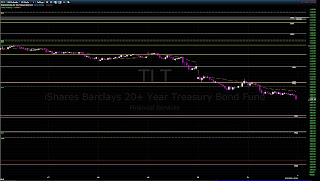 Bonds, by the way, just broke a serious head and shoulders.  Here's a weekly view: 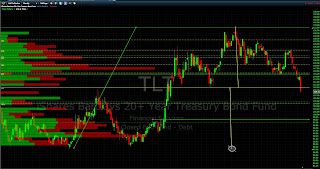 Not pretty.  You can see the major fib. levels below, and, I drew in a vertical line that shows the measured move from the break down in the 87 area.  Think Bennie has lost control of interest rates. 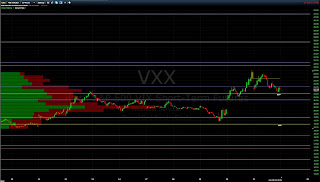