Here are the images: 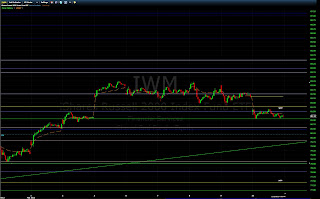 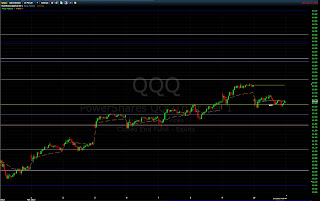 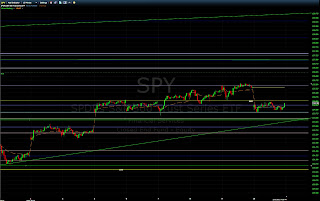 ...Not really...Anyway, if you look at each of the diagrams, you'll see Friday formed what is arguably a classic double/triple bottom in all three.  Friday's drop, arguably, resulted from the Greeks repudiation of the then current debt deal.

Imo...expect there to be an announcement of a deal probably before the market opens on Monday so only futures traders will get to take advantage of the subsequent rocketing of the indices, and we equity folks will be sitting on our hands (I enjoy the palms up position) in a major gap up Monday, bored out of our chairs with the lack of trades.  Having said that, if the indices do not react that way, then the downside becomes a higher probability.

As we can see from these 15 minute charts, IWM is falling somewhat (or is it a bull flag?) and SPY and QQQ are flattening.  No surprise after the run they've had.  IWM peaked out at about 39% gain since Oct 2011, the SPY and QQQ about 26%.  Looking at daily charts, no trend is yet in danger.

Looking at levels of support and resistance 137.00 to 137.40 looks like the area of greatest resistance in the SPY...that is likely the next test. Below, there are no major confluence areas until we approach the  131 area and then the monthly pivot.  The IWM is the canary in the coal mine for risk-on or risk-off.  As I said, it's been flagging.  Now, is it a bull flag or the start of a pull back?

Here's the link that describes the process:
http://tradinglog.realitytrader.com/2011/09/nemos-findings.html
Posted by nemo at 11:34 AM