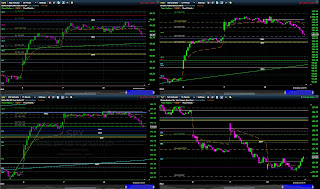 9/10/2012:  ZZZZZzzzzzzz....well, not really.  Many stocks had relatively significant movement yesterday.  The indexes did some meandering, with IWM testing the ranges: first the old resistance from Thursday, that became new support on Friday-which it tested twice, and then by gently piercing the Friday highs just under yesterday's confluence of the Daily R1 and the Quarterly R1with an end of day descent leaving it resting on the Monthly R1 and Daily S1.  SPY's low bottomed at 144 (there's the test of the whole number again) near the 144.02 daily S1 then breaching Friday's high before joining the IWM and financials in the afternoon descent closing at the Daily S3.

Notice how SPY and IWM's movements were not correlated until the final descent starting 1:45.

Financials, tested the Friday's high's concurrently with the SPY and then were weak the rest of the day touching the daily S2 before closing slightly above.

Bonds, as can be expected, rallied into the close as the indexes sputtered.

Now for the descent....I'm on record expecting a relative meandering until the German pronouncements. I of course, could be wrong.  What could be the psychology of the market going into the 12th?

We've just had a long bullish run.  We're coming into a relatively short time period of relative uncertainty.  What do you do?  Simple...you take some profit, or hedge.  Thus the weakness, or at least a reasonable explanation of the weakness.  Which leads me to my, Nemo-you moron...moment.

Today is 9/11....mmmmmhhhh, which coincidently is the day before the pronouncement.  If the market is us, and the algo's are programmed by us, might that lead to a bit of hesitancy psychologically?   Just sayin'...

Watch the weekly pivots, and watch previous ranges for the action to test them. 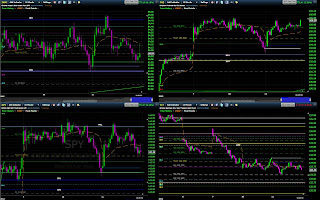 Financials stayed strong all day, so didn't  the "Vampire Squid" GS, although it did sell off to close right on VWAP.

One more interesting tidbit.  The $ sold off significantly, yet the market couldn't maintain the rally.  Is it more a question of strength for the Euro and the expectation of a German "Die Daumen Auf! -thumbs up  (well that's literal...they don't really say that) for the ECB.

9/12/2012:  The Germans, as expected, didn't go Kamikaze (mixed historic metaphors there)  on the EU/ECB.   Indexes held the range, and GS finished near the top of it's range.  Can See Lloyd (doing God's work) Blankfein lubing up the arm to shove up Bernanke's ass to make his lips move tomorrow.

He's taking 40billion a month of that bad collateral off the hands of the bank.   Mmmmhhhh...raw materials and oil ripped north with the decision.  I wonder how far the economy can go as oil climbs towards it's 2008 highs with the Middle East looking more like a powder keg every day?

We're not far away from my month end target of 153 spy.  There are headwinds in the 150 area.  IWM finished Thursday off, but got withing .70 USD of its 2011 highs.  Expecting gap up on Friday, with the potential for profit taking going into the afternoon.

I expect this bus to keep going north into the elections.  There is nothing to slow this train down unless earnings season is a disaster.