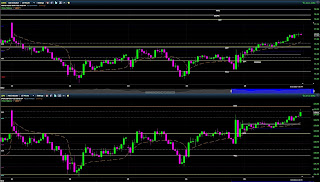 As we can see the expected gap up on Monday basically started at the Monthly Pivot of both the IWM and SPY...(well, close enough for government work) and proceeded to sell off and then recovering the entire range to basically start where we began, bookended by Spain news on one end, and what will be the Greek election on the other.  Gotta' love the symmetry...

As we can see the gentle sloping rise from the bottom: does it imply strength or a bear flag?

Let's look at the 30 minute chart for some inkling as to what the future may present: 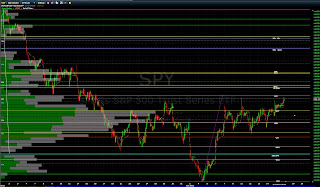 The Inverse Head and Shoulders (or is that a cup and handle?) is obvious with a measured move to the 141 area, but rarely do we find such predictability, otherwise, we'd all be billionaires.  (I'll just have to settle for handsome and witty).  So, with a Greek weekend coming, (and we're not talking Bachanalian debauchery at a fraternity house)...oh the pain of memory, as silly optimistic humans, the market may paint it optimistically and gap up.  Being the eternal cynic, (H.L. Mencken was my hero) I lean towards that.  Notice the "volume at price" gap between the monthly pivot point and the 50SMA and WR1-that could be easily traversed.  Should we open above and it holds we can see a strong confluence at the QPP/WR2 which also contains the 27.2 fib extension.

Should it not, and it falls below the MPP, look for a return to the WPP.  Of course, anything can happen, but it is likely that the 200 SMA will provide some supportn not only because of what it is, but because of the left side of the Inverse Head and Shoulders.  Also, notice the exactitude with which price action bottomed at the MS1...so we're likely safe until the 4th of July weekend....mmmhhh, symmetry rears it's ugly head again...will the holiday presage market fireworks as well?  I wonder if the heavy hitters are wondering if they'll be able to summer in the Hamptons. 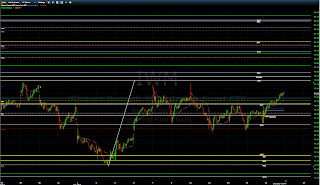 Same relative chart, although a tad weaker this week then the SPY.  I guess risk-on tempered itself into the weekend election festivities.  The MPP and 50SMA are a bit farther away but could easily be breached.   same resistance and support dynamics as spy.  Same exactitude at the bottom with MS1, with the one variance of both the SPP and YPP in that area.  Anyway...

Here are the remaining charts for next week: 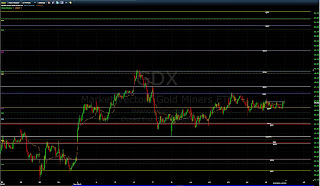 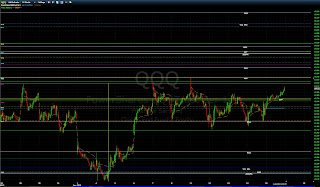